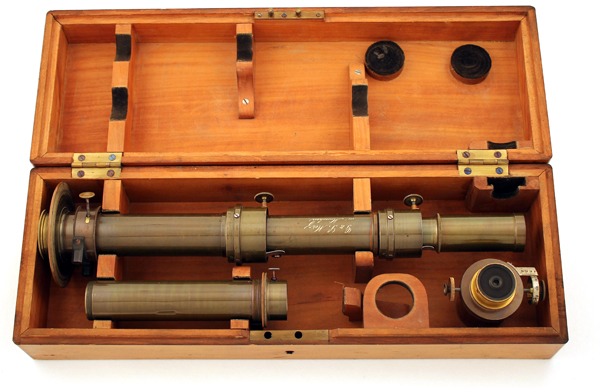 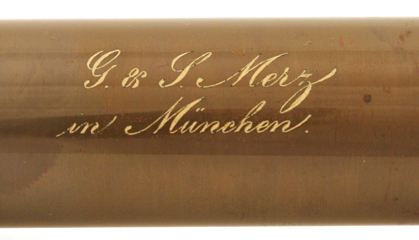 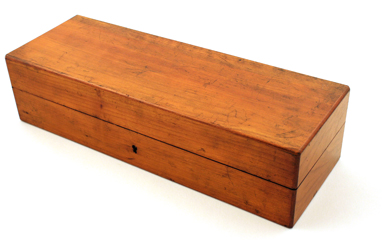 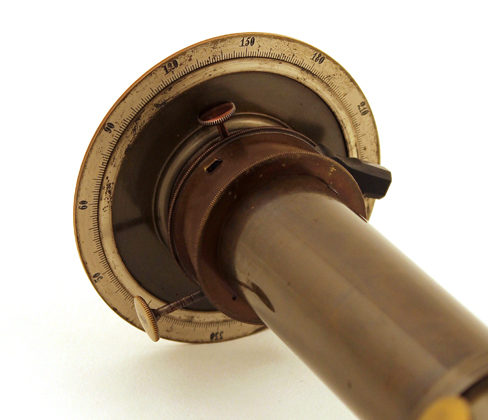 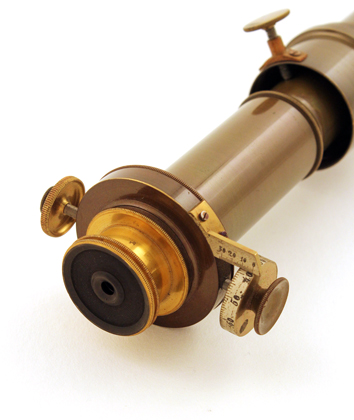 On a small Universal Stellar Spectroscope.

In Carl’s Repertorium der Physik, vol. vi. p. 273, there is contained the description of a small universal star-spectroscope constructed by me, accompanied by an explanatory Plate. As, however, since that article appeared this compendious little instrument has been improved in various essential particulars, at the suggestion of a friend I make bold to forward to you a short description thereof, and also a corrected sketch of its arrangement. The instrument consists of two principal parts, or, in other words, of two spectroscopes, each of which may be used singly, and which are in part complementary to each other. The one part, which is a simple direct-vision spectroscope, is provided with a prism of novel construction. This prism consists of five elements, two of which are of flint glass, each having a refracting-angle of 84°; the other three prisms are of crown glass; one of them has also a refracting-angle of 84°, the other two of 87°, as shown in Plate II.fig. 4. This portion of the apparatus is furnished with a positive eyepiece with an equivalent focal length of 1 inch, and it is also provided with a cylindrical lens of 1 inch radius. The arrangement of this portion of the apparatus is shown in fig. 1.

The compound spectroscope, which is represented in fig. 2, is provided with a similar spectral prism. It has a tube furnished with a slit, and a collimator, and likewise an observing-telescope. The object-glasses of the latter and of the collimator are of the same focal length, namely 4 inches; their aperture is 2/3 of an inch.

The observing telescope carries, moreover, a needle-micrometer with an eyepiece of 1/2-inch focal length. It is also provided with two red sun-glasses, which admit of being used either singly or together. This compound spectroscope is moreover furnished with a small divided position-circle situated at B.

With the view of such observations, a peculiar construction has been given to the slit (fig. 3), by means of which, through the medium of a screw, its two steel jaws can be simultaneously moved away from the center and opened to the distance of nearly a quarter of an inch. The slit is further fitted with an arrangement for throwing aside the illuminating prism that is employed in comparing the spectra of flames. This latter movement is effected by means of a small lever, to the long arm of which the prism in question is attached, and the short arm of which is inserted into an aperture in the rotating ring R. When such a motion has been given to this ring that the aperture at which the light enters (a) is closed, the prism no longer remains opposite the slit, so that the cone of rays derived from the refractor has then free passage through the full width of the jaws.
The lateral movement near K on the observing-telescope enables any separate colour of the spectrum to be brought into position, while a similar movement at K‘ near the slit serves for altering the angle on incidence of the rays, thus bringing into the field of view the extreme portions of the spectrum, even when extended by the employment of the two systems of prisms.

With respect to the rectification of the instrument, it is only necessary to observe that all the parts that unscrew are provided with suitable marks; and, speaking generally, the apparatus may be looked upon as an adjustment when the so-called Fraunhofer lines are situated at right angles to the spectrum.

With reference to the efficiency of the instrument were described, I beg leave, in conclusion, to quote the following passage, translated from the letter addressed to me by Dr. Schellen of Cologne, on the 27th of September last. The writer therein says, „after duly adjusting your refractor of 34 lines aperture, in the possession of Herr von Camphausen, I was not only enabled to see at once brightly and with great distinctness the lines H alpha, H beta, and D 3, but also, on widening the aperture of the slit, to observe at different places on the sun’s limb various solar protuberances.“

The price of the complete apparatus, with the improvements above described, and packed in an elegant case, in 240 Bavarian florins, which are equal to GBP 20. 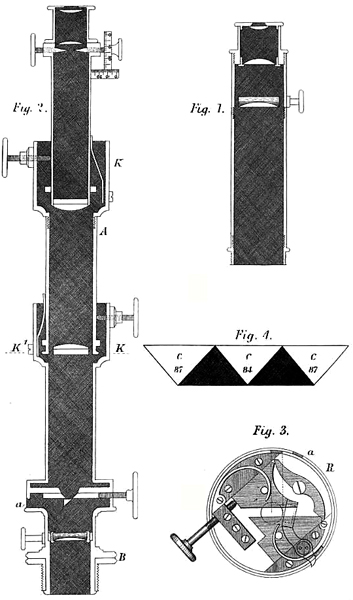 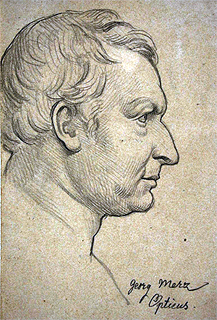